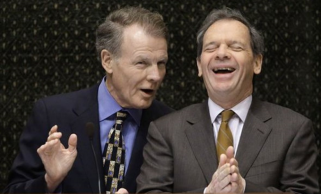 On March 14, 2004 James E. Snyder ran for 10th Subcircuit A vacancy which Snyder miserably lost with merely 14% of votes.

It appears that Judge Snyder’s appointment came with a handsome price tag.

In 2006 well-connected Judge Kowalski was retained for six years term  but in 2007 suddenly retired in favor of James E. Snyder who, bear to repeat, previously lost two public elections and  was appointed on Kowalski’s vacancy.  Kowalski’s remaining 5 years of judicial term (2007-2012) could worth as much as $1,000,000.00 ($1 million)  or about $200K per year in judicial pay and benefits. Yet, he gave up his judicial seat along with all earnings in favor of elections loser James E. Snyder.

Based on Judge Kowalski’s  adverse public character –  disapproved by 10 Bar Associations;  sued a lawyer who represented his father Walter J. Kowalski, Cook County judge,  over how the lawyer handled the estate of his father’s mistress Geraldine Fudema; relentlessly bullied his Hispanic neighbor after retirement – I doubt if  Judge Robert J. Kowalski would  vacate his seat without a compensation, which could be as high as $1,000,000.00. 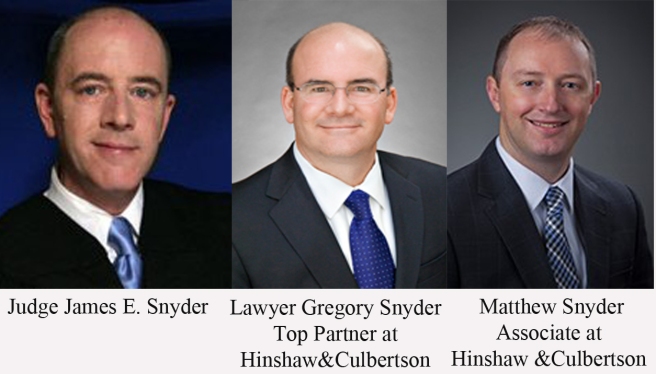 Judge James E. Snyder is very likely a relative to Kenneth Snyder, founder of Snyder Pickerill Media Group.This small corporation whose published annual income  ranges between $55K to $77K per year,  collected over $12,000,000.00 between 2012-2016 from various political candidates for some media services (I never saw their political ads).

Judge James E. Snyder freely  trespass applicable laws; knowingly acts in excess of all jurisdiction (and admits it); fix cases in favor of his parties of interests; bully and terrorize his non-favorite African American lawyers and ProSe litigants from the bench in the most hostile manner; and fail to disclose his conflicts of interests to attorneys who appear before him.

In August 2015 ProSe litigant Eric Bartl created a GoFundMe page where he described his experience in Judge James E. Snyder’s court: “.[.]  I have been a victim of chicago corruption and anti-christian discrimination in the courts, a situation which has left me in financial ruin.   My state court case against the cab company was under the control of Judge James E. Snyder, a well known gay activist judge (who are generally known to be very hostile and anti-Christian).

[.] The corrupt anti-Christian judge (James Snyder) who had been managing the case and doing everything he could to help the opposing attorney bury it (even his bailiff once told me I should drop my case because I was in way over my head, can you imagine a deputy sheriff jumping into the political effort to stop my pursuit of justice) assigned it to another like minded hostile and corrupt judge (Sydney A. Jones III) who went on to make one completely lawless and obviously discriminatory ruling after another, making a case which should have been a slam dunk for me as difficult as possible to win. Judge Snyder dragged one motion of mine on for 6 months before getting a hearing on it. He expressed tremendous hostility toward me during one hearing and even refused to let me speak. Judge Snyder manually assigned my case to Judge Sydney A. Jones III, who was the one who completely sabotaged my case before trial and fixed the jury outcome.

I have personal and identical experience in Judge Snyder’s Court which had nothing to do with the Law or Justice but  Judge Snyder abuses of power and retaliatory hostility when Snyder  fixed my case  in favor of well-connected Law Firm Gordon Rees with over 800 lawyers who enlisted three lawyers: Managing Partner J. Hayes Ryan; Senior Counselor Eckerly and Associate Murphy. I was ProSe.

Judge Snyder’s vindictiveness  went not only against me but also against his innocent clerk whom I gave a courtesy copy of my Motion where I attached  Judge Snyder’s own inteview where he claimed that “I try everyday to be the best judge that I can be: To be fair, to know the law, and to treat the people who appear in court with respect” I was going to ask Judge Snyder why he is acting so differently in my case.

Judge Snyder, who did not give me any opportunity to argue my Motion, dismissed my case  in the most corrupt in unlawful manner, without any written Opinion, just an oral statement (after I requested explanations for his dismissal) where he specifically mentioned that his verdict was based on my objections to his unlawful practices AND my “communication with his clerk” about his failed elections and judicial malpractices.

It was not true I did not discussed Snyder’s election or his judicial misconduct with any clerks and merely gave her a copy of my Motion with Snyder’s printed  2008 interview on the top. It was enough for  Judge Snyder to dismiss my case with prejudice, without ANY review on case merits;  and fire and replace his Court clerk.

Moreover, Judge Snyder admitted to act in excess of all jurisdiction when he:

(1) dismissed my case in October 2016 in favor of his preferred parties – corporate Defendants represented by well-connected lawyers whose legal fees paid by insurance company, even though I filed a Motion for Continuance, which was scheduled for hearing in November 2016  and Judge Snyder granted it.  Worth to mention, Gordon Rees lawyers  demanded Judge Snyder to rule on their legally insufficient Motion to Dismiss my case, filed without a Sworn Affidavit, which is a violation of numerous laws including  5/2-619 and IL S.Ct.R 191;  and move individual  Defendants for November’s hearing, without any Motions to Sever their clients. Obviously, referred lawyers are not required to comply with any laws and rules  in Judge Snyder’s Court.

(2) In November 2016 Snyder conducted a  hearing on my  Motion filed in October 2016; and allowed me to file an Amended Complaint against ALL parties, including corporate Defendants whom he unlawfully dismissed in October 2016.

(4) When lawyer Eckerly asked to file a Motion to Dismiss my Amended Complaint (which contradicts with her statement that her clients are not parties in my case), she did it in the most unprofessional manner.Eckerly’s motion was legally insufficient, as usual; and based on Court’s “lack of jurisidicton” due to October 2016 dismissal order, which was a void decision due to insufficient motion to Dismiss; lack of Motion to sever her clients; and my motion for continuance to November, granted by Snyder.

Furthermore,  Judge Snyder  reversed and overruled his October 2016 order  twice,  specially when he allowed me to amend my Complaint  against all Defendants.

So, when on June 15, 2017  Judge Snyder granted Corporate  lawyers’ fatally defective Motion to Dismiss my Amended Complaint – Snyder basically admitted that during all this time – between October 2016 through June 2017 – he knowingly and maliciously acted in excess of all jurisdiction solely to cause me damages with preparing and filing a complex legal action; and place me under extreme emotional distress.

ILDFR was represented by IL AG Lisa Madigan. At the very first status hearing before Judge Snyder, he instantly  fixed my claim against ILDFR with prejudice without giving me any opportunity to speak and without ANY explanations why. He merely stated that my claim is dismissed. Of course, Judge Snyder never mentioned his conflict of interests and favorable connections with Lisa Madigan’s family; and how she defended him in Lanre Amu v. James Snyder case. 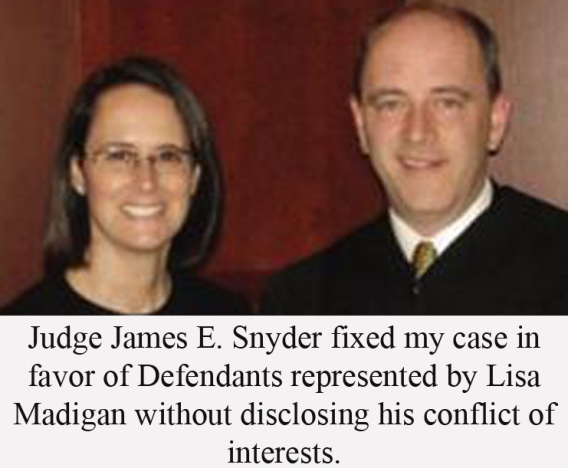 Real estate company who was represented by three licensed lawyers backed by insurance company  were absolutely confident in Judge Snyder’s favorable verdict and repeatedly sent me harassing letters and emails where they tried to extort from me money (up to $15,000.00 !!!) and demanded to drop my case.

Judge Snyder did not fail them. He favorably accepted all legally insufficient Motions filed by my Defendants; granted a bogus “Emergency Motion” filed by lawyer Murphy to quash my Subpoena – which is a direct violation of Court’s own rules which Judge Snyder has no intention to follow.

When my opponents ONCE followed the law and filed Sworn Affidavit from my Defendants – it was all based on false statements and perjuries. When I pointed it to judge Snyder – he paid zero attention.

Judge Snyder turned a blind eye to all legal malpractices committed by my Defendants’ well-connected lawyers, so it was absolutely clear whose side Judge Snyder took from the commencement of my case – more powerful and a better funded party. Similarly, like in cases mentioned above.